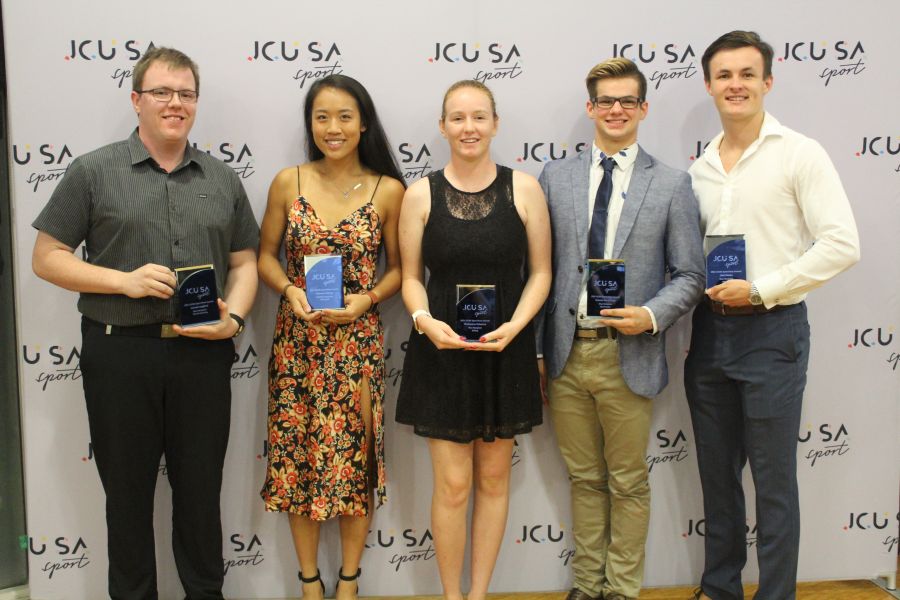 Blues Awards are broken into two groups – Blue & Half Blue.

In addition to these awards, JCUSA Sport & Recreation also handed out the JCU Spirit of Sport Award which recognizes the commitment and involvement in our programs and JCUSA Sportsperson of the Year.

Here are the following award recipients:

Jarrod is currently studying a Bachelor of Commerce Majoring in Accounting at JCU.  Currently a member of the Nationals Training Squad, Jarrod won the Queensland Kegel Open for the third straight time and fourth in total – making him the first person to win the competition four times.  During that competition, Jarrod had an average score of 237.5 at the event.  Jarrod also finished 2nd place at the Australian Open with an average score of 224.5, was the Queensland North Tour Champion, Mike Carney Memorial Tour Champion and Mackay Open Champion.  Jarrod’s performances across these events also earned him the National Rankings Champion making him the best domestic bowler in Australia for 2021.

Connor is studying a Bachelor of Education (Majoring in Primary Education).  Connor has competed at all levels in gymnastics throughout 2021.  At the regional competition, Connor placed first in the competition.  At the Queensland Gymnastics State Championships, Connor claimed a fourth overall finish.  His performance at this event earned him a spot on the Queensland side to compete at the Australian Gymnastics Championships - the only level 10 gymnast outside of Brisbane.  Connor was part of the Queensland team that won the Gold in the men’s Open Men’s Artistic team event.  He also placed in a respectful 9th place in the individual competition.  All of this was after only having knee surgery 6 months prior to the Gymnastics season.

Jake is currently studying a Bachelor of Business (International) at JCU and is part of the Australian Track and Field team.  Jake competed across 100m, 200m and 4x100m relay.  In 100m, Jake finished first at the Joanna Stone Shield in Brisbane and the Oceania Invitational on the Gold Coast, second at the Denis Boyd Shield in Brisbane and third at the Festival of Athletics held in Townsville.  In the 200m, Jake came first at the Joanna Stone Shield and third at the Denise Boyd Shield and came first in the 4x100m relay at two of the Oceania Invitational events.    Jake also made the 100m final at the Queensland Track Classic and the Australian Championships.  Jake’s best times in 2021 include 10.38 & 10.41 at the Oceania Invitational, 10.47 at the Queensland Track Classic and 10.50 at the Australian Championships.  All of this was while Jake competed throughout 2021 while injured.

Chelseann is currently studying a Bachelor of Sports and Exercise Science at JCU.  In 2021 in the Sport of Sailing, Chelseann competed at the Special Olympics States Games where she won 2 golds in the Level 4 & Level 5 competitions and 1 silver in the Level 2 competition.  Chelseann also competed at the Batercard Sail Paradise where she finished 2nd in the Queensland Skud Championship and 5th in the Trailables Division.  Other events she competed in was the Laser Radial States and the Queensland Youth Championships where she finished 8th in the LaserRadial division and 3rd in the RsFeva division.  Chelseann also made the decision in 2021 to move away from representing in Special Olympic events and is now moving towards with Para Sailing reinstated for the 2028 Los Angeles Olympics.

Mackenzie is currently studying a Bachelor of Medicine and Surgery at JCU.  In the sport of rugby union, Mackenzie was selected for Townsville Brolga’s team that competed against FNQ in March.  From there, Mackenzie was selected for the North Queensland side that competed against South Queensland in May.  Her performance at that game earned her selection in the QLD Country team at the Division 2 Nationals however Mackenzie had to withdraw due to a broken collar bone.  Mackenzie was part of the Western Suburbs team who won the local Townsville Rugby Union competition breaking Teachers West winning streak.  Mackenzie also played for Saints Catholic College in the Fisher Shield competition competing in sports such as rugby union, ultimate disc and soccer.

Shannon is currently studying a Bachelor of Medicine/Bachelor of Surgery at JCU.  In 2021, Shannon captained the Northern Monsoons Women’s Indoor Volleyball team.  She was part of the team that won the North Queensland Cup back in May while also being awarded Most Valuable Player.  Shannon also won gold at the Townsville Classic event held in September and was part of the team that won bronze at the Queensland State Championships Division 1 in October.  Shannon has also competed in beach volleyball at the Great Barrier Reef Challenge, Townsville Beach Volleyball Clubs 2021 King and Queen of the Beach Tournament and the Queensland Beach Volleyball Tour in Townsville, and is now a Volleyball Queensland coach for the State beach volleyball teams.

Congratulations to all award recipients and we look forward to hold this event in 2022.